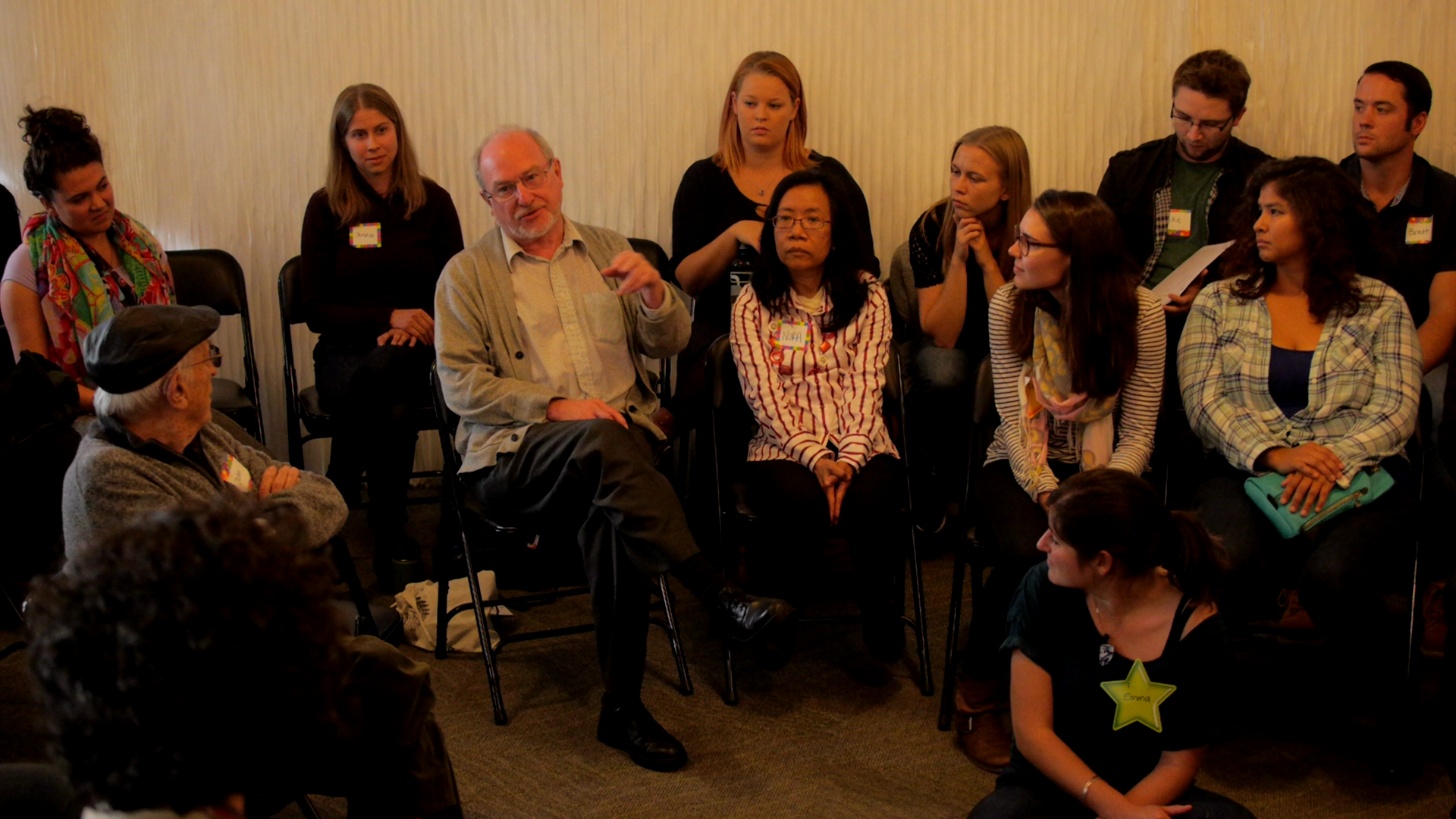 The October 3rd event, Is Hope Bullshit, was a firsthand opportunity for residents of the Vancouver community to learn about Deep Democracy as a facilitation and negotiation tool.  This event was the first of the larger Deep Democracy Leadership Dialogue series, a group of discussions spanning 5 continents and 8 countries.  The primary objective of this series was to introduce Deep Democracy as a tool for city leaders engaging in complex group facilitation.  Deep Democracy’s methodology looks establish a better understanding of an issue by teasing out all voices and opinions surrounding an issue.  In doing so, participants’ values and beliefs are brought to the surface and resolutions can be based upon a common understanding of the conflict at hand.  October 3rd’s event showcased this methodology by exploring fundamental ideas about hope’s place in the planning process.

The following post details an interview with Peter Boothroyd, professor emeritus at UBC’s School of Community and Regional Planning and event attendee, about the day and the Deep Democracy process.  The italicized text represents paraphrased responses to the bolded questions, and the blue text symbolizes additional thoughts on the interview itself.

“What happened at the session?”

The day centered on a group of people coming together to wrestle with the question, “is hope bullshit?”  In doing so, attendees hoped to gain a better understanding of how deep democracy works as a facilitation and negotiation tool.

The event began with a presentation explaining deep democracy’s origins, deep democracy’s methodology, and how it has been used in South Africa to address issues surrounding apartheid.  After the presentation, the group participated in an exercise aimed at fleshing out the different ideas surrounding hope within the planning process.  Once the ideas were identified, smaller groups were used to debrief the ideas that had come about from the large group exercise.

What did you learned or what insights did you take home?

Peter began his response to this question by explaining the two main reasons he chose to attend the event.  First, he was interested in learning more about deep democracy and how it can be used as a facilitation strategy.  The second, and primary reason, was an attraction to the question – one he believes should be addressed by “anybody engaged in planning.”  Peter explained that the idea behind, “is hope bullshit?” is a fundamental planning question and hoped to come away with new ideas, or better insight, surrounding hope.  He noted that while John Friedmann’s earlier work surrounding the distinction between ‘hope’ and ‘expectation’ were with him throughout the event, the processes helped him sort out his own thinking about the topic.

While the event helped establish a greater understanding around the idea of hope, he did not leave with confidence surrounding how to use deep democracy as a facilitation tool.  Peter felt this could have been the result of the abstract nature of the topic and a different topic, potentially something more specific to the Vancouver region, could have helped demonstrate how these tools could be used for other scenarios.

What were the positives and negatives?

The main positive of the event, and the deep democracy methodology, was its ability to have participants speak directly with one another, as opposed to having the facilitator act as a bridge.  While Peter found the event to be an enjoyable and interesting experience overall, the negative aspects of the event, as previously noted, revolved around a misunderstanding of how these methods were to be used in other contexts.  How could these strategies be used to solve more concrete issues, where there are more definitive winners and losers? Without other, more tangible, examples it was not apparent how the methods should be applied.  Additionally, Peter did not feel the amplification process was necessary for the soft shoe shuffle event. Most of the comments were well articulated and the audience could react accordingly without the amplification.  This also caused the exercise to become a bit long winded.

What do you notice about the method used at the event that was unique, might be helpful to complex situation?

“That’s what I don’t know.”  Peter did not see how the methodology would translate to a contentious situation where the participants are more personally attached to an issue.  If some participants felt particularly strongly about an issue, he did not know how deep democracy would be able to prevent them from taking over a discussion.

What do you notice about the facilitators that is different from what you’ve seen elsewhere?

Peter found this method to be highly engaging and useful for encouraging participants to speak with one another.  As opposed to less engaging strategies, such as a dotmocracy exercise, the soft shoe shuffle and other deep democracy exercises promoted the audience to interact and state their opinions directly to one another. While this was seen as a clear asset for this event, he still wondered if this would occur with more tense topics.

The second half of the interview was spent discussing how I found the event and how deep democracy could be used to address more localized issues.  I agreed with Peter’s point that the event could have been more precise with how deep democracy could be translated into other scenarios.  Although the event did do a strong job of teasing out, and discussing, all thoughts surrounding the topic of hope, it could have been useful to intermittently step back and analyze how the previous events could have been implemented in other conversations.  I also felt the soft shoe shuffle segment was a bit long and potentially could have benefitted from a larger space.  With so many people participating in the exercise, the conversation quickly devolved into a two sided debate as opposed to letting people spread out in order to express differing viewpoints.

After discussing my reflections on the event, Peter suggested we speculate on how the deep democracy methodology could be used for a current issue like the Georgia Street Viaducts. Peter was unsure how these strategies would result in a different outcome than what would happen compared to people talking over a table with one another.  During the interview, I too was not entirely sure how to incorporate deep democracy into this politically fueled debate.

Upon further reflection, it seems deep democracy would have been most beneficial at the onset of the viaduct discussions.  All logistical and political challenges notwithstanding, it would have likely been beneficial for TransLink, landowners, the City of Vancouver, and relevant provincial bodies to debrief about all the potential scenarios for the viaducts and the surrounding land.  In doing so, all parties would have had the opportunity to express both concerns and desired outcomes.  Without these discussions, many parties seem taken by surprise and left feeling underrepresented in the final decision to tear down the viaducts.  Though deep democracy may not be able to determine what the most suitable approach for viaduct land, it does provide a platform for teasing out all potential ideas surrounding the project.  With these new common understandings and ideas in mind, decision makers would be better equipped to reach agreed upon verdicts.